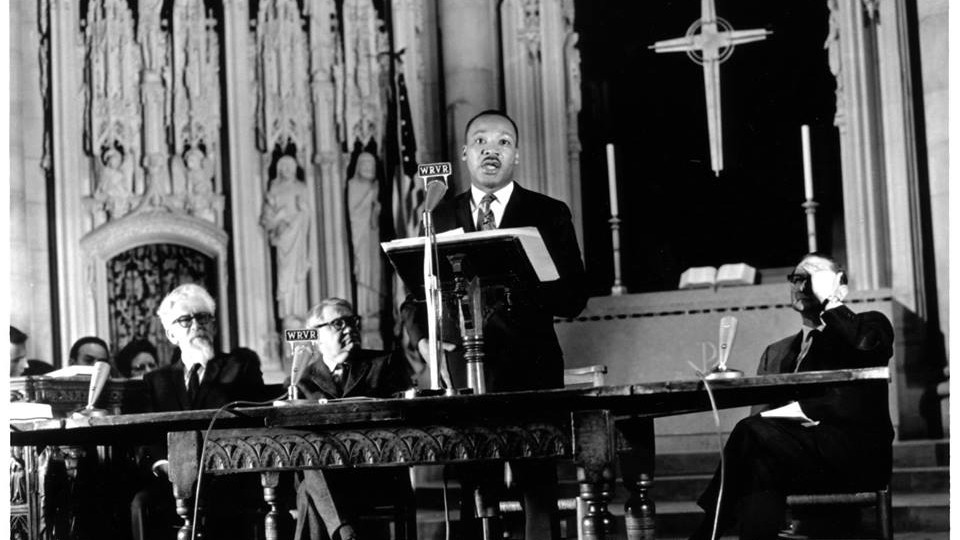 While customs, practices, traditions, beliefs, political ideologies, and various other human social constructs often highlight our differences, at the end of the day we are all members of the human race. We are all connected and, therefore, should all be concerned for one another.

On April 4, 1967, Dr. Martin Luther King, Jr. delivered one of his most powerful and challenging speeches, “Beyond Vietnam: A Time to Break Silence.” I believe the speech is among the bravest (and possibly greatest) speeches in the history of humanity.

The war in Vietnam started in 1955. America entered the war in 1965. Two years later King said he could no longer remain silent regarding the war. In his speech, King stated, “a time comes when silence is betrayal.”

King went on to say,

…many persons have questioned me about the wisdom of my path. At the heart of their concerns this query has often loomed large and loud: Why are you speaking about war, Dr. King? Why are you joining the voices of dissent? Peace and civil rights don’t mix, they say. Aren’t you hurting the cause of your people, they ask? And when I hear them, though I often understand the source of their concern, I am nevertheless greatly saddened, for such questions mean that the inquirers have not really known me, my commitment, or my calling.

Justice Is For All People

King understood “his people” to be ALL people. He understood his calling as serving ALL people. King refused to choose between Civil Rights for African-Americans and peace for Vietnamese.

In his speech, King urged “a radical revolution of values” that emphasizes love and justice for all people — especially those marginalized by society. King asserted, “We are called to speak for the weak, for the voiceless, for victims of our nation and for those it calls enemy….”

King is widely known for saying, “Injustice anywhere is a threat to justice everywhere.”

In a speech that is far more popular among most Americans, King declared that he dreamed of an America where All Lives really do Matter.

I believe most people fail to understand the true meaning of King’s “I Have a Dream” speech. King’s “dream” calls for action. We can’t simply say, “All Lives Matter” when our actions don’t reveal that ALL Lives (really do) Matter.

King’s criticism of the Vietnam War fits squarely within the context of his dream. When King challenged the war and suggested Americans should care about Vietnamese lives, he was being true to his dream — a dream many Americans failed (and still fail) to understand. King was criticized harshly.

Both the Washington Post and New York Times published editorials criticizing the speech, with the Post noting that King’s speech had “diminished his usefulness to his cause, to his country, and to his people.”

The Post revealed through its use of the phrase “his people,” an utter failure to understand King’s commitment and calling to ALL people. They failed to understand his universalist vision — a vision he had declared in his “I Have a Dream” speech four years earlier.

King’s dream represented the ideal of America — a universalist ideal that Langston Hughes referred to when he wrote, “Let America be America Again.”

Let America be America again.
Let it be the dream it used to be….

O, let my land be a land where Liberty
Is crowned with no false patriotic wreath,
But opportunity is real, and life is free,
Equality is in the air we breathe.

(There’s never been equality for me,
Nor freedom in this “homeland of the free.”)

I am the poor white, fooled and pushed apart,
I am the Negro bearing slavery’s scars.
I am the red man driven from the land,
I am the immigrant clutching the hope I seek —
And finding only the same old stupid plan
Of dog eat dog, of mighty crush the weak…

I am the farmer, bondsman to the soil.
I am the worker sold to the machine.
I am the Negro, servant to you all.
I am the people, humble, hungry, mean —
Hungry yet today despite the dream…

O, let America be America again —
The land that never has been yet —
And yet must be — the land where every man is free.
The land that’s mine — the poor man’s, Indian’s, Negro’s, ME —
Who made America,
Whose sweat and blood, whose faith and pain,
Whose hand at the foundry, whose plow in the rain,
Must bring back our mighty dream again…

O, yes,
I say it plain,
America never was America to me,
And yet I swear this oath —
America will be!

All Lives (really do) Matter

While it is easy to declare “All Lives Matter.” It’s much harder to live a life that reflects that all lives really do matter. Living this type of life requires a “radical revolution of values.”

According to King, this radical revolution requires an all-embracing and unconditional love for ALL people. It requires living a life that demonstrates that ALL Lives (really do) Matter.

Such a revolution is a “call for a worldwide fellowship that lifts neighborly concern beyond one’s tribe, race, class, and nation…”

The revolution King demanded forces us to no longer “worship the god of hate or bow before the altar of retaliation.”

Fifty-five years after King’s “Beyond Vietnam” speech, this is a life lesson we still have yet to learn: “ALL Lives (really do) Matter.”