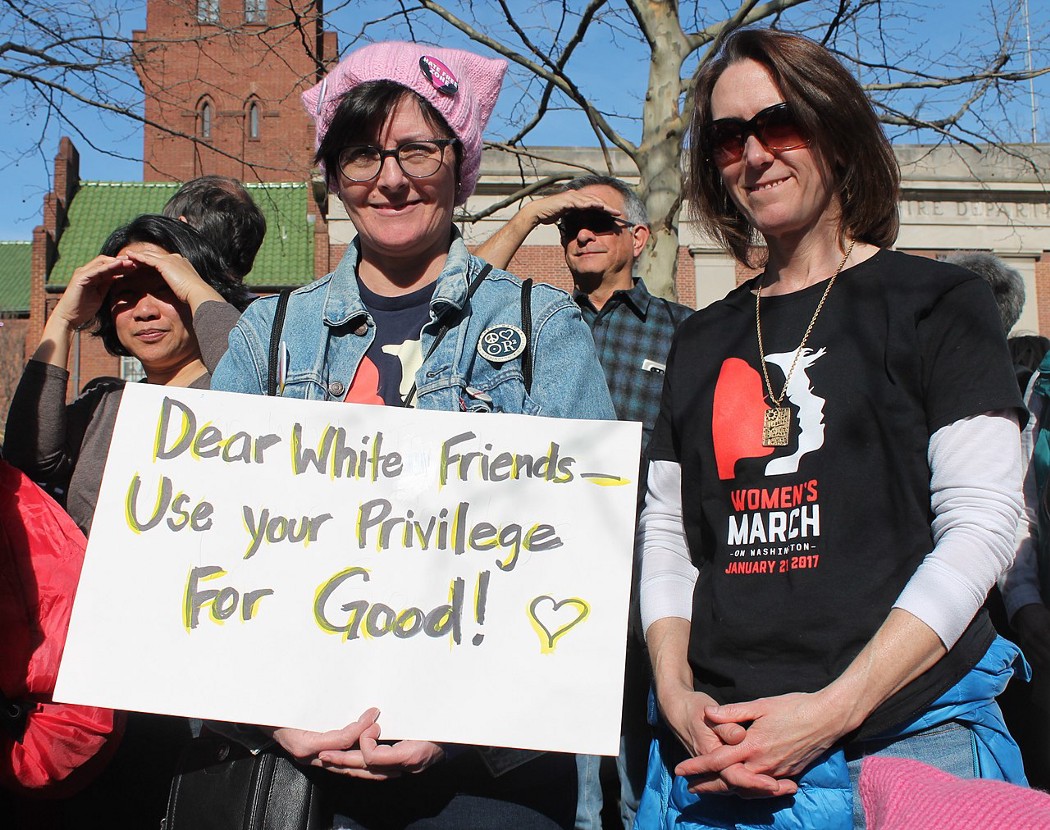 Photo by Elvert via Wikimedia Commons

These are the only two options. There is no neutral ground. If we are not challenging privilege, we are by default preserving privilege.

This article has several familiar terms. In some ways, these terms have become popular buzzwords often used by people and organizations that want to be seen as progressive.

I define privilege as “a special advantage granted or available to a particular person or group of people that results in an inequitable disadvantage being experienced by others.”

The last part of this definition is crucial because people will often identify measures designed to correct inequities as measures granting “privilege.”

I disagree with this argument because corrective measures designed to eliminate negative racial disparities experienced by black and brown people rarely result in “an inequitable disadvantage being experienced by white people.”

Diversity is the presence of “difference” within a given setting. Diversity includes all the ways in which people differ. While it might seem obvious, it is important to understand that diversity is about a collective or a group and can only exist in collectives.

An individual is not diverse. He or she might be unique, but not diverse. They might bring diversity to your institution, but they in and of themselves are not diverse. They’re a woman; they’re a person of color; they’re part of the LGBTQIA+ community. While they might possess multiple and socially perceived opposing intersectional identities (all of which contribute to their uniqueness), one person by themself does not equal diversity.

Diversity is about a collective or a group and can only exist in collectives.

Equating one person with diversity often results in “tokenism.” Diversity occurs in a collective that exhibits measurable differences across that collective.

Inclusion is about folks with different identities feeling and/or being valued, welcomed, and empowered to participate fully in life and decision-making processes within a collective. I once read somewhere that “while diversity can be achieved by inviting different kinds of people to a party, inclusion is achieved when those different kinds of people are equally involved in the planning of the next party.”

The presence of diversity does not mean everyone (particularly those with marginalized identities ) is included. It doesn’t mean everyone will be given opportunities to contribute, grow, develop, and express who they truly are.

Inclusion is not an automatic consequence of diversity. As a black professor at a predominantly white liberal arts college, I am acutely aware that colleges often spend a significant amount of time and money bringing diverse populations of people to their campuses without ever changing the environment of their campuses — without creating an ethos where people can be who they truly are. It’s not enough to have explicit strategies for increasing diversity. There also needs to be specific strategies for increasing inclusion.

Equity represents fair treatment, access, opportunity, and advancement for all people, while at the same time striving to identify and eliminate barriers that prevent the full participation and inclusion of people who are often marginalized.

Equity is an approach that ensures everyone has access to the same outcomes. Equity recognizes that advantages and barriers exist, and that, as a result, everyone does not start from the same place. People, therefore, may need different opportunities to achieve the same outcomes.

While I have been referring to diversity, equity, and inclusion (DEI) in general, I’d like to now consider DEI through a lens of race and racial justice.

I believe all conversations regarding DEI (especially within higher education) need to be explicit in foregrounding race and racial justice as part of the conversation.

According to the online Racial Equity Tools Glossary, racial justice is “the proactive reinforcement of policies, practices, attitudes, and actions that produce equitable power, access, opportunities, treatment, impacts, and outcomes for all.”

We Have To Be Willing To Talk About Race

According to DiAngelo, white fragility is discomfort and defensiveness experienced by white people when confronted with information about racial inequities and injustice.

There are essentially two reasons why most white people get uncomfortable talking about race, racism, and racial justice. One reason is that they don’t know how to talk about these issues and they’re afraid of being criticized for saying something wrong.

The second reason is that they’ve bought into the false and naïve notion that they are “colorblind.” They argue that race is a social construct and therefore not real. While race is indeed a social construct for which there is no biological basis, race and racism are social realities.

Stop Lying About Being Colorblind

Anyone who says they don’t see a black man when they look at me is lying. If I went on a shooting rampage and then fled, virtually everyone present would describe me to the police as a “black” man. No one would tell the police, “Well, officer, you know… I didn’t see his color.”

People who claim to be colorblind falsely equate seeing blackness with thinking negatively about blackness. Which when you think about it, shows how deeply ingrained racism and racial bias are.

Because we’ve been conditioned to think negatively about blackness, many people think the only way to avoid the negative connotations associated with blackness is to convince themselves they don’t see blackness.

I have never heard anyone say, “When I look at a rainbow I don’t see color.” It’s the colors that make the rainbow beautiful. When white people look at me, I don’t want them not to see my color, I simply want them not to have negative connotations associated with my color.

Racism, Not Race, Is The Problem

Echoing the sentiment of Ibram X. Kendi, a New York Times bestselling author and founder of the Antiracist Research and Policy Center, data show that racial disparities are the direct result of racist practices and policies.

This phenomenon is best illustrated by a sculpture by the Danish sculptor and activist, Jens Galschiot. The sculpture is of “Lady Justice” depicted as an obese woman from the West sitting on the shoulders of a starved African man. The sculpture is called “Survival of the Fattest.”

The inscription on the statue reads, “I’m sitting on the back of a man; He is sinking under the burden; I would do anything to help him; Except stepping down from his back.”

The sculpture illustrates that when addressing oppression, people will often claim a willingness to do “anything” to help — anything “except” seriously examining and giving up our oppressive beliefs, practices, and policies that privilege us.