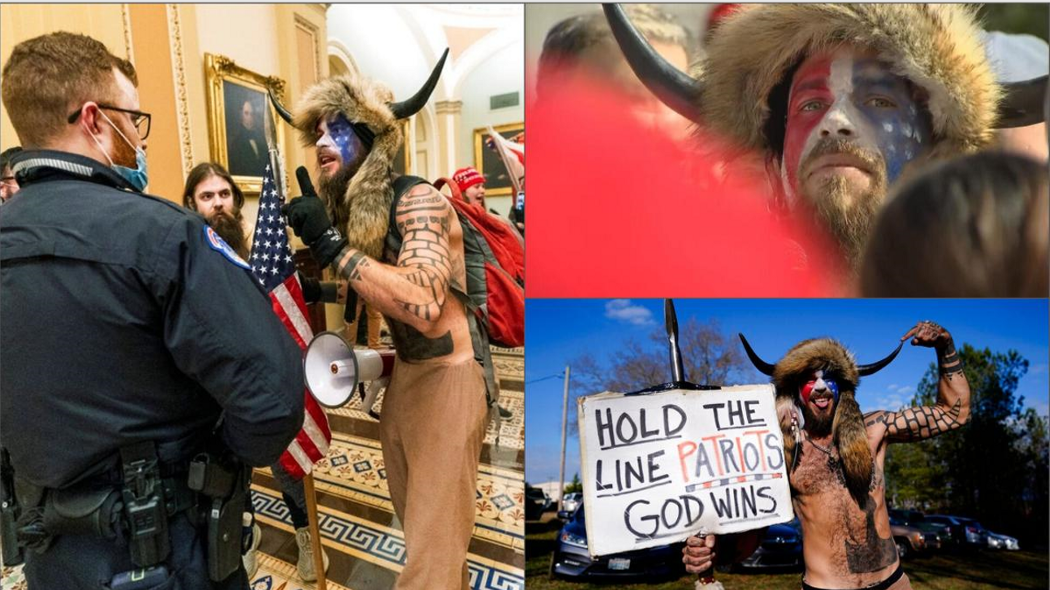 Collage of public images of Arizona native, Jake Angeli from the Jan 6 insurrection

Like many Americans, I sat through two hours of disturbing testimony and video footage as the US House of Representatives’ Select Committee on the January 6 Capitol insurrection kicked off the first of a series of public hearings aimed at focusing attention on that day’s violence.

Rep. Bennie G. Thompson (D-Miss.), chairman of the Jan. 6 committee, invoked the horrors inflicted on black people during slavery and by the Ku Klux Klan in his opening remarks.

Thompson, who was born and raised in Mississippi, said he’s from a part of the country “where people justify the actions of slavery, the Ku Klux Klan and lynching.”

Thompson went on to say “I’m reminded of that dark history as I hear voices today try and justify the actions of the insurrectionists on January 6th, 2021,”

While I appreciated the parallel drawn by Representative Thompson, I was disappointed that the issue of racism and white supremacy quickly faded away.

Democracy has always been under attack in the United States

Nearly 400 years of brutal racist violence against BIPOC communities in America has been nothing less than an attack on democracy. What makes the Capitol insurrection seem so much more severe to many Americans is that the attack was not perpetrated against a BIPOC community.

While the attack was motivated by racist fears, hatred, and white supremacy, it was directed against the so-called seat of American democracy rather than against a BIPOC community. This is one of the reasons there is so much white outrage regarding the Capitol insurrection.

While the treasonous act of insurrection that took place on Jan 6 was horrific and appalling to witness, I, like many black American viewers, was more appalled by the hypocrisy and double standard that allowed the insurrection to happen in the first place. One prominent black columnist wrote,

The double standard is not surprising, but it is instructive. Our society is permissive of white rage. That rage is constantly coddled, explained, massaged, and justified. We are forever told that white anger must be understood, white grievance must be explained, and white racism must be studied because if we just dig down deep enough, we’ll find that it’s actually motivated by some other, more benign factor.

In contrast, Black anger is arrested. Black rage is executed. Black grievance is dismissed. It’s not that Black people don’t have cause to storm the Capitol and demand redress for injustices committed against us — it’s that a Black person, with or without a weapon, wouldn’t get two steps inside Statuary Hall without being gunned down by police.

Police, National Guard, and Secret Service personnel were ready and armed the summer before to oppose the presence of peaceful and unarmed Black Lives Matter protestors in D.C.

They were unprepared and nowhere to be found, however, when hundreds of white Trump supporters stormed and breached the U.S. Capitol with weapons, even though these Trump supporters had repeatedly and publicly declared weeks prior that they were coming to the Capitol on January 6 to engage in violent protest.

It is this sort of hypocrisy and double standard that made the Capitol insurrection so appalling to many black Americans.

While the video footage of the Jan 6 insurrection was appalling and difficult to watch, BIPOC communities have been terrorized, beaten, and decimated much more savagely than anything we saw in the videos from the Capitol insurrection.

Trump’s “big lie” is not the only lie

The United States of America — was built upon at least two sets of lies. The first set of lies asserted that black people are essentially inferior, less human than white people, and therefore deserving of their particular station in life.

It’s important to realize and acknowledge that this set of lies was not simply embraced by white southern segregationists who supported slavery, it was also embraced by northern white abolitionists who opposed slavery and also opposed full racial equality and integration.

In addition to this set of lies, the United States was also built upon another set of lies regarding who and what the United States is as a nation. These lies present America as a just, fair, and democratic nation founded upon the idea that “all people are created equal and… are endowed by their Creator with certain unalienable rights, [such as]… Life, Liberty and the pursuit of Happiness.”

This lie is bigger than Trump’s “big lie.”

When measured against our actions, the story we have told ourselves about America being a divinely sanctioned nation called to be a beacon of light and a moral force in the world is a lie.

It is the acceptance of this lie by so many Americans that makes the assault on the U.S. Capitol so appalling to them.

Until Americans (especially white Americans) acknowledge America’s founding stories and assertions as myths and lies and stop promoting them as historical and current truths, we as a nation will never experience the trust required to heal our fractured nation and build a constructive democracy that promotes national unity and rejects all forms of oppression.

Engendering trust requires a willingness to acknowledge the lies upon which the United States is built and to stop ignoring them by promoting the idea of returning America to some former greatness that has never existed.

The genocide of native peoples, the existence of chattel slavery and racial apartheid, Japanese internment camps, the subordination of women, and the oppression of LGBTQIA+ people illustrate that America has never been an ideal democracy that serves all people as one people (E Pluribus Unum).

While the U.S. might be moving toward “a more perfect union,” there is no period of greatness that America can return to. This is one of the reasons why phrases like “Make America Great Again” and “All Lives Matter” contribute to distrust. The phrases ignore and deny the lies upon which this nation has been built.

We have to stop perpetuating lies about who we are as a nation — lies that deny the reality of structural social inequities in order to promote a false national identity.

We cannot fix what ails us as a fractured nation when we do not tell the truth about what ails us — when we continue to tell lies.

For the sake of our nation, our democracy, and the well-being of all of our people, it’s time to stop telling lies and to start telling the truth.