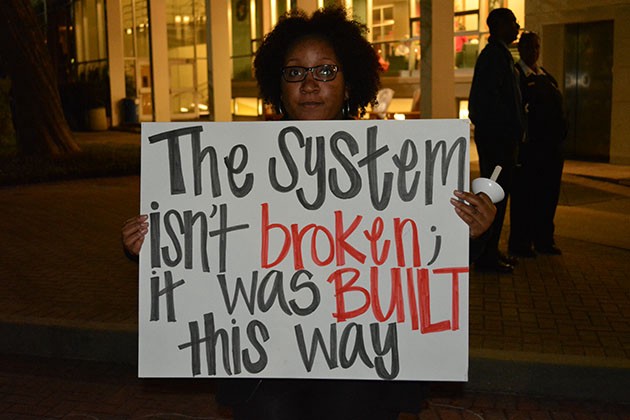 Photo from the Atlanta Black Star

I am so tired of hearing people talk about a “broken” criminal justice system. Recent developments in Oklahoma have people once again talking about “fixing” a broken justice system.

In Oklahoma (as in many states), the primary way of paying for the justice system is by fines and fees. The state depends on the offender to pay for the so-called justice system.

While I agree with the op-ed writer that the criminal justice system in Oklahoma is unjust, it is not “broken.” It does exactly what it was designed to do.

While I am not opposed to criminal justice reform, we need much more than reform. We need a new justice system altogether.

We need a system that is actually designed to ensure justice for ALL people. Our current system was never intended to benefit all people.

Chief Justice Roger B. Taney stated more honestly than anyone the intent of the American justice system.

The case before the court was that of Dred Scott v. Sanford. Dred Scott was an enslaved black man who had lived in the free state of Illinois and the free territory of Wisconsin before living in the slave state of Missouri. Scott sued for his freedom and his case made its way to the U.S. Supreme Court.

Taney wrote in the Court’s majority opinion that, because Scott was black, he was not a citizen and therefore had no right to sue. According to Taney, the framers of the Constitution believed that blacks “had no rights which the white man was bound to respect…

Referring to the language in the Declaration of Independence that includes the phrase, “all men are created equal,” Taney asserted, “it is too clear for dispute, that the enslaved African race were not intended to be included, and formed no part of the people who framed and adopted this declaration. . . .”

As offensive as Taney’s comments might appear, Taney’s assertion is correct. The American justice system was never intended to serve and/or protect black people.

Our current system is not broken. It actually does what it was designed to do.

In November 2021, Kyle Rittenhouse was found not guilty on all charges against him. Rittenhouse fatally shot Joseph Rosenbaum and Anthony Huber and wounded Gaige Grosskreutz in a summer 2020 protest following the police shooting of Jacob Blake, a black man, in Kenosha, Wisconsin.

After the verdict, emotions ripped across the nation. Many who felt betrayed by the verdict, once again referred to a “broken” legal system. In response to the verdict, President Biden told reporters he stood by the verdict. He stated, “I stand by what the jury has to say. The jury system works.”

While I was appalled by the Rittenhouse verdict, Biden’s assertion is correct. “The jury system works.” It does what it is designed to do.

The system that resulted in the exoneration of the police responsible for killing Breonna Taylor is a system that supports the legitimization of no-knock warrants.

A no-knock warrant is a warrant issued by a judge that allows law enforcement to enter a property without immediate prior notification of the residents, such as by knocking or ringing a doorbell.

No-knock warrants are once again under scrutiny following the Feb. 2 fatal shooting of Amir Locke, a 22-year-old black man who was killed during a raid by Minneapolis police officers.

Policing in the United States has racist roots. Historically, innocent black people have been disproportionately victimized by a policing system designed from its inception to protect and enrich whiteness by victimizing and terrorizing black people. Violent and oppressive racialized policing is not simply a thing of the past. It continues in America to this day.

Yes, it is “legal” for police in the United States to murder innocent people. The system is designed to allow such murders.

The so-called justice system in the U.S. encourages police violence. It is designed to ensure such acts of violence (especially when perpetrated against black and brown people) virtually always qualify as being “legal.” This is illustrated by the fact that U.S. police officers freely kill civilians at much higher rates than other countries.

Again, this is not because the system is “broken.” The system does what it was (and is) designed to do.

The statement released by the NAACP after the Kentucky grand jury chose not to indict any of the officers involved in the murder of Breonna Taylor is correct in its assertion that “The justice system failed Breonna Taylor and, as such, failed us.”

While the system did fail Breonna Taylor, it did not fail her because it is “broken.” An attorney for one of the officers involved in Breonna Taylor’s murder issued a statement immediately following the grand jury’s announcement, saying the verdict shows the “system worked.”

Yes, the system did work. It did exactly what it is designed to do.

By only recommending the grand jury consider charges of wanton endangerment, the Kentucky Attorney General virtually guaranteed that the grand jury would not indict any of the police officers for the murder of Breonna Taylor.