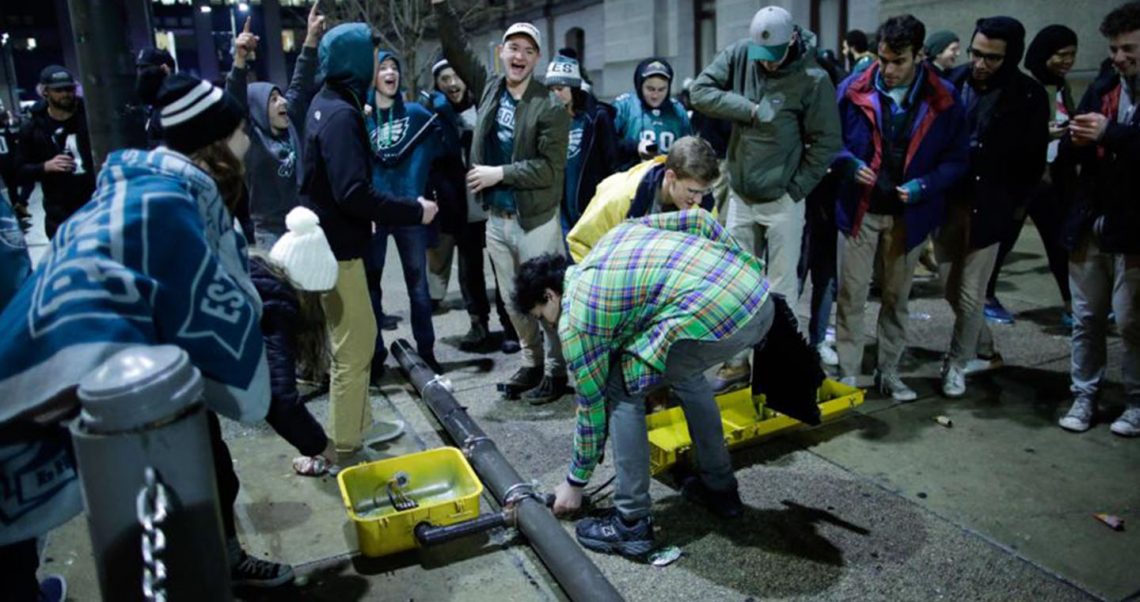 Black Lives Matter supporters were once again reminded after this year’s Super Bowl that some lives matter more than others.

Immediately after the Eagles’ Super Bowl victory, fans in Philadelphia engaged in the all too often ritual of post-victory rioting. Rioters in Philadelphia toppled structures, tore down light poles, and vandalized vehicles and storefronts as they celebrated, while the Philadelphia police calmly observed.

When the Eagles secured a trip to the Super Bowl two weeks earlier by defeating the Minnesota Vikings, crowds of fans got publicly drunk, set fires, scaled traffic poles, and vandalized city monuments.

While police and city officials knew thousands of people would take to the streets in Philadelphia if the Eagles won the Super Bowl, police did not show up wearing militarized riot gear in order to “protect” the city. It appears as though police were actually unprepared for the level of mayhem exhibited.

Despite the fact that several people were reported brawling, looting, flipping over cars, scaling the city hall gates, mounting garbage trucks and police vehicles, and tearing down traffic lights and lamp posts, city officials said the celebrations were mostly “peaceful.”

Why is the destruction of property in certain situations deemed “peaceful” but in other situations “violent?” Why call civil unrest and lawless behavior related to a sporting event a “celebration” instead of  a “riot?”

While police, politicians, and elected officials often invoke the phrase “law and order” as a way of condemning and even suppressing peaceful protests by predominantly black crowds, these same people accept and often minimize the destructive celebratory rioting of predominantly white crowds.

Reactions to sports riots clearly reveal the double standard regarding reactions to riots. While the damage to property and human lives is as extensive in sport-related riots as in social protest riots, sports rioters are rarely referred to derogatorily.

Sports rioters are usually called “revelers,” “celebrants” and “fans.” They’re usually not even called “rioters” in most cases.

They’re not derided as “criminals,” “thugs,” or even “violent.” Such terms are part of the racialized lexicon reserved primarily for black rioters protesting social injustice and expressing anger over clear examples of systemic racism.

As Black Lives Matter of Greater New York president, Hank Newsome, stated, “You can riot if you’re white and your team wins, but if you’re black and being killed, you can’t speak out.”

While not calm, most protests against social injustices begin as nonviolent protests. They often turn violent because of the way police respond.

Explaining riots as a response to injustice, Martin Luther King, Jr. once stated, “A riot is the language of the unheard.”

While I do not support people taking to the streets, engaging in physical violence, and vandalizing cars, storefronts, and other forms of public and private property, I understand how and why peaceful protests against social injustice sometimes turn violent. I do not understand, however, “rioting” as a way of celebrating a sporting victory.

The Black Lives Matter movement came into being primarily in response to legally sanctioned acts of excessive racialized police violence against unarmed black people. Such violence provides a visual demonstration that the lives of black people are not valued as much as the lives of white people.

It’s not enough to simply declare, “All Lives Matter,” we as a nation have to demonstrate through our collective actions that all lives matter.