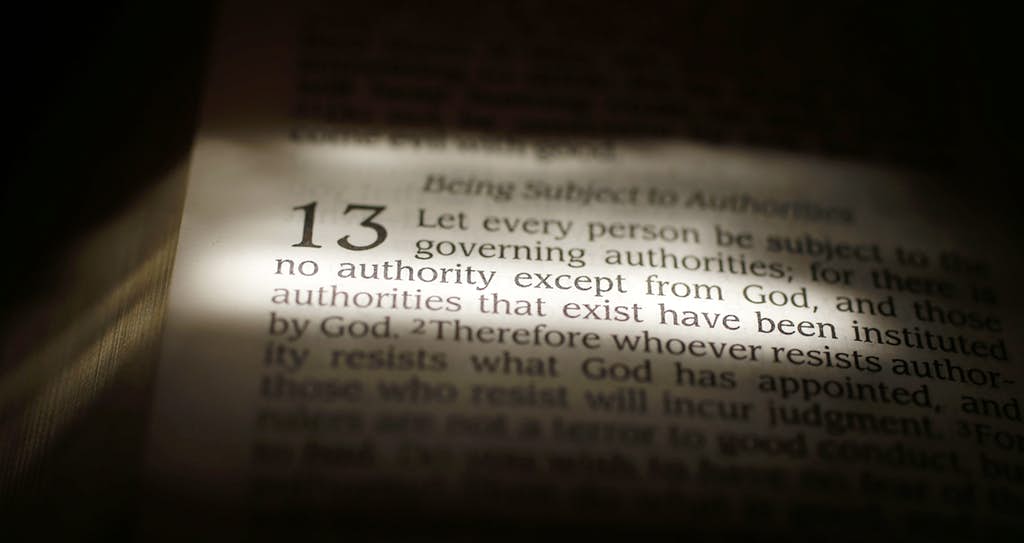 On Thursday, June 14, Attorney General Jeff Sessions defended the Trump administration’s policy of separating immigrant children from their families at the border by referencing the New Testament. “I would cite you to the Apostle Paul and his clear and wise command in Romans 13,” Sessions said, “to obey the laws of the government because God has ordained them for the purpose of order.”

By appealing to “the purpose of order,” Sessions invoked the argument made by 18th century Loyalists who opposed the American Revolution and all resistance to Britain. Loyalists taught unconditional submission to British governance as a way of preserving law and order. Patriots, on the other hand, did not believe the Bible supported submission to evil or tyrannous authorities that violated God’s moral law.

While Patriots fought for “freedom” from British governance, Romans 13 became the Patriots’ lynchpin for denying freedom to enslaved black people. It served as a basis for enforcing the Fugitive Slave Act of 1850 that gave teeth to a provision in the U.S. Constitution requiring any individual who had escaped enslavement be returned to slavery.

Seven years later in 1857, Chief Justice Roger Taney issued his majority opinion in the case of Scott v. Sanford. The case concerned the legal condition of Dred Scott, who had been held as a slave in Missouri before traveling with his owner to Wisconsin and then returning to Missouri. Because slavery was outlawed in the Northwest Territory, Scott claimed that his time in Wisconsin had effectuated his legal emancipation.

Taney argued that the framers of the Constitution never intended that the “class of persons . . . whose ancestors were Negroes of the African race, and imported into this country, and sold and held as slaves” could “become entitled to all the rights and privileges and immunities” guaranteed to citizens of the United States.

Taney concluded in his opinion that black people were “of an inferior order and altogether unfit to associate with the white race, either in social or political relations, and so far inferior that they had no rights which the white man was bound to respect.”

According to those who invoked Romans 13, the Scott v Sanford decision represented a divine “law of the government” that demanded unconditional obedience.

Recently Romans 13 was given as a reason why innocent black people should stop resisting when they are accosted by police. In an attempt to disparage the Black Lives Matter movement, a Christian pastor from Dallas, TX asserted, “The New Testament says in Romans 13:4 that law enforcement officers are ministers of God sent by God to punish evildoers.’’

While the outcry has been intense, when U.S. Attorney General Jefferson Beauregard Sessions III quoted Romans 13 to defend the Trump administration’s zero-tolerance immigration policy, he was simply the latest in a long line of biblical interpreters who through their invoking of the Bible’s contested authority have continued the tradition of justifying oppression and domination in the name of God as a way of preserving  “law and order.”

While Trump has frequently expressed regret in selecting Sessions as Attorney General (often because of Sessions unwillingness to demonstrate a Romans 13 type of unconditional support of President Donald Trump—especially in relation to stopping the special counsel’s investigation into possible collusion between Trump and Russia), Trump’s selection of Sessions for the highest “law and order” position in America sheds light on the meaning of Trump’s “Make America Great Again” slogan.

Sessions has always been known for his support of tough immigration enforcement policies. In a 2015 radio interview, Sessions praised the 1924 anti-immigration Johnson-Reed Act, declaring disgustingly, “In seven years we’ll have the highest percentage of Americans, non-native born, since the founding of the Republic.”

For Trump, making America great again means returning America to a romanticized period of racial and cultural homogeneity as well as “law and order” where everyone looks American and where those who challenge or question imperial leadership are dealt with by the power of the state, even when that power means stifling suffrage, suppressing civil and human rights, and treating immigrants as less than human. Trump’s romanticized America is reminiscent of McCarthyism.

Trump recently revealed his admiration for this sort of cultural homogeneity and imperial power when he praised the leadership of North Korean dictator, Kim Jong Un. Trump has also expressed praise and admiration of other dictatorial regimes.

America has used the Bible to justify the decimation of this nation’s indigenous people, to justify the oppression of women, to justify slavery, lynchings, segregation, identity-based medical experimentation, Japanese internment camps, global militarization, the marginalization of LGBTQAIPK peoples, the exploitation of the poor, the inhumane treatment of immigrants, and the list goes on.