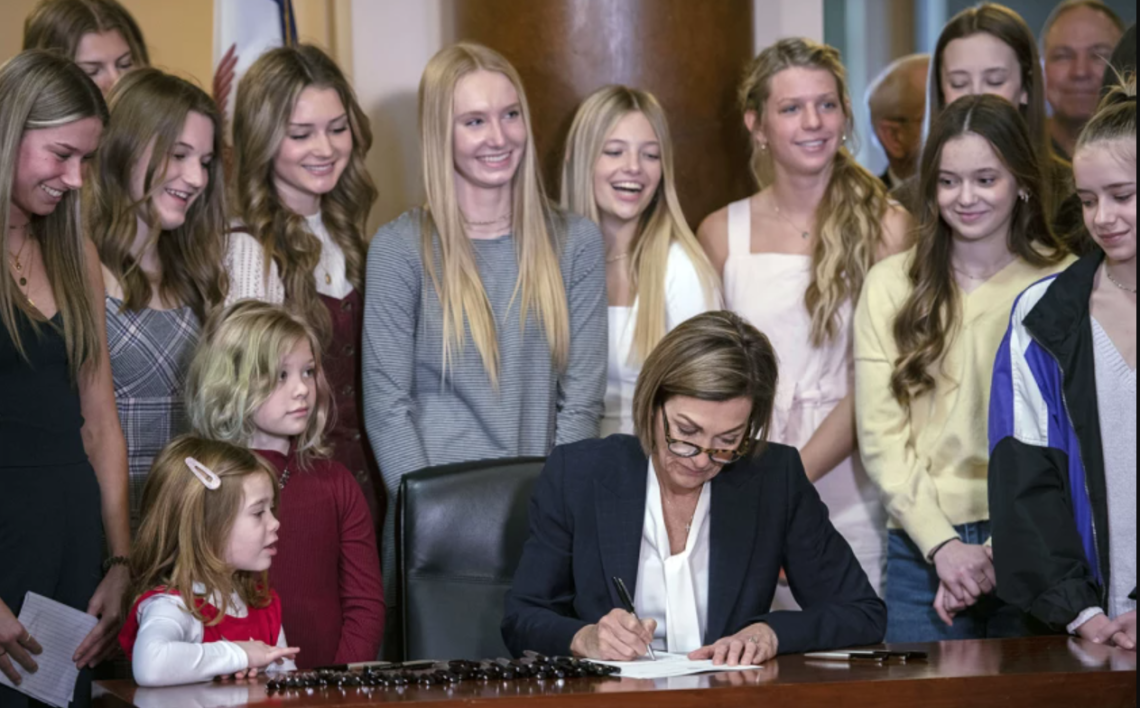 Choosing Governor Reynolds reveals something about where the Republican Party is right now.

Reynolds represents what it means to lead with conviction and true faith in our fellow citizens… She handled COVID by choosing freedom over lockdowns and personal responsibility over mandates — leading to real economic recovery from the pandemic. She kept kids in school and critical race theory out.

Who exactly are the “follow citizens” McCarthy is referring to?

While Reynolds’ ban has nothing to do with critical race theory, why is keeping CRT out of school so praiseworthy?

While Washington Democrats fail working Americans, Republican governors are fighting and winning for families. Governor Kim Reynolds’ brave, bold, and successful leadership for Iowans has put her right at the front of that pack. She fought COVID without forgetting common sense and protected Iowans’ health and their rights at the same time. She’s defended kids and parents with laws that have kept students in classrooms and woke propaganda out.

Who exactly are the “families” McConnell is referring to?

Who are the kids and parents Reynolds has defended?

No! Her laws have intentionally excluded them.

Republican leadership has selected Reynolds as a rising star in the Republican party because they want to convey to voters that the party is committed to exclusion and the preservation of white privilege.

On March 3, she signed a bill into law further marginalizing transgender girls and women.

HF 2416 bans transgender girls and women in Iowa from competing in sports according to their gender identity.

It worries me that this bill is needed at all. It’s hard to imagine how anyone who cares about the rights of women and girls could support anything less.

She goes on to say,

No amount of talent, training or effort on their part can make up for the “natural, physical advantages males have over females.”

Reynolds is saying this in 2022. Billie Jean King dismantled this notion nearly 50 years ago in 1973.

King convincingly defeated and humiliated Bobby Riggs in straight tennis sets. While seminal, King victory is only one of several examples of women athletes excelling over men on their on turf.

Under Reynolds’ law, which takes effect immediately, only cisgender female athletes are allowed to compete in female sports.

Transgender girls and women would be forced to play against boys and men. Interestingly, the bill does not address the eligibility of transgender boys, who would be free to compete in male athletics.

While the underlying premise of Reynolds’ argument is insulting to girls and women, this not my focus here.

Reynolds disingenuously presents a concern for girls and women as a rationale to marginalize possibly the most marginalized children.

Do we honestly think transgender children, adolescents, and teens are choosing to be despised and marginalized for athletic advantage?

Where is the concern for children and parents that Republicans praise Reynolds for?

Where is the concern for transgender children who are struggling in ways that most people can never imagine or understand?

Where is Reynolds’ concern for parents fighting to help their children experience belonging in a society that rejects them?

Who is Reynolds truly concerned for? The picture taken at Reynolds’ signing of HF 2416 provides some insight regarding who Reynolds is really concerned about. 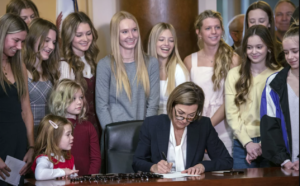 Do I need to ask the obvious question regarding what demographic of girls appears to be missing here?

Becky Smith, executive director of Iowa Safe Schools, which advocates for LGBTQ youth, held up a transgender flag behind the bill signing ceremony. She said she wanted to show transgender students that there are community members who oppose the law.

As I listened to Reynolds claim the law is about a “fairness issue,” I was reminded of my grandmother’s words.

My deceased grandmother use to say, “beware of people who piss in your face and tell you it’s raining.”

She was warning me to beware of people claiming good intentions when their purpose actually is to harm me.

Who exactly is this law “fair” for? Is this law a win for ALL girls and women?

While claiming to be fair, the law only adds to the marginalization of some of our most marginalized children.

In her SOTU response, Reynolds made it clear she is primarily committed to opposing President Biden.

Reynolds refused to acknowledge Joe Biden as the legitimate winner of the 2020 presidential election. She praised a Texas lawsuit that sought to throw out tens of millions of votes and lent credibility to false claims about fraud and irregularities.

That order followed a Supreme Court decision confirming transgender rights are protected by Title VII of the 1964 Civil Rights Act.

These so-called values do not reflect a concern for “fairness” for ALL people.