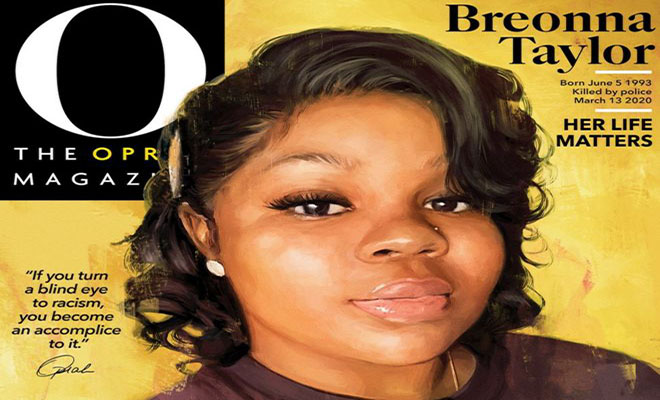 September 2020 Cover of the Oprah Magazine

Yes, the “justice system” failed Breonna Taylor, but not because it’s “broken”

I once again find myself frustrated, disappointed, weary, and exhausted by the fact police officers involved in the murder of another innocent black person are not being held accountable for their murder.

While many bemoan what is often described as a “broken” legal system, it is abundantly clear that the system is not “broken.” The system does exactly what it has been designed to do.

Policing in the United States has racist roots. Historically, innocent black people have been disproportionately victimized by a “policing system” designed from its inception to protect and enrich “whiteness” by victimizing and terrorizing “free” and “freed” (i.e. formerly enslaved) black people. This violent and oppressive racialized policing has continued through American history to this day.

What the case of Breonna Taylor also makes abundantly clear is that while black people can be innocent of having committed any crime, the murder of  innocent black people by police can easily be justified as “legal.”

Yes, it is legal for police in the U.S. to murder innocent people. The so-called justice system in the U.S. encourages police violence and is designed to ensure such acts of violence (especially when perpetrated against black and brown people) virtually always qualify as being “legal.” This is illustrated by the fact that U.S. police officers freely kill civilians at much higher rates than other countries.

Again, this is not because the system is “broken.” The system does what it was (and is) designed to do. The statement released from the NAACP is correct in its assertion that “The justice system failed Breonna Taylor and, as such, failed us.”

The system did not fail Breonna Taylor, however, because it is “broken.” An attorney for one of  the officers involved in Breonna Taylor’s murder issued a statement immediately following the grand jury’s announcement not to indict his client, saying the verdict shows the “system worked.”

Yes, the system did work. It did exactly what it is designed to do.

By only recommending the grand jury consider charges of wanton endangerment, the Kentucky Attorney General virtually guaranteed that the grand jury would not indict any of the police officers for the murder of Breonna Taylor.

Police violence against black people is not random

If Americans truly want a legal system that holds police accountable for murdering innocent people, then Americans are going to have to demand a new legal system.