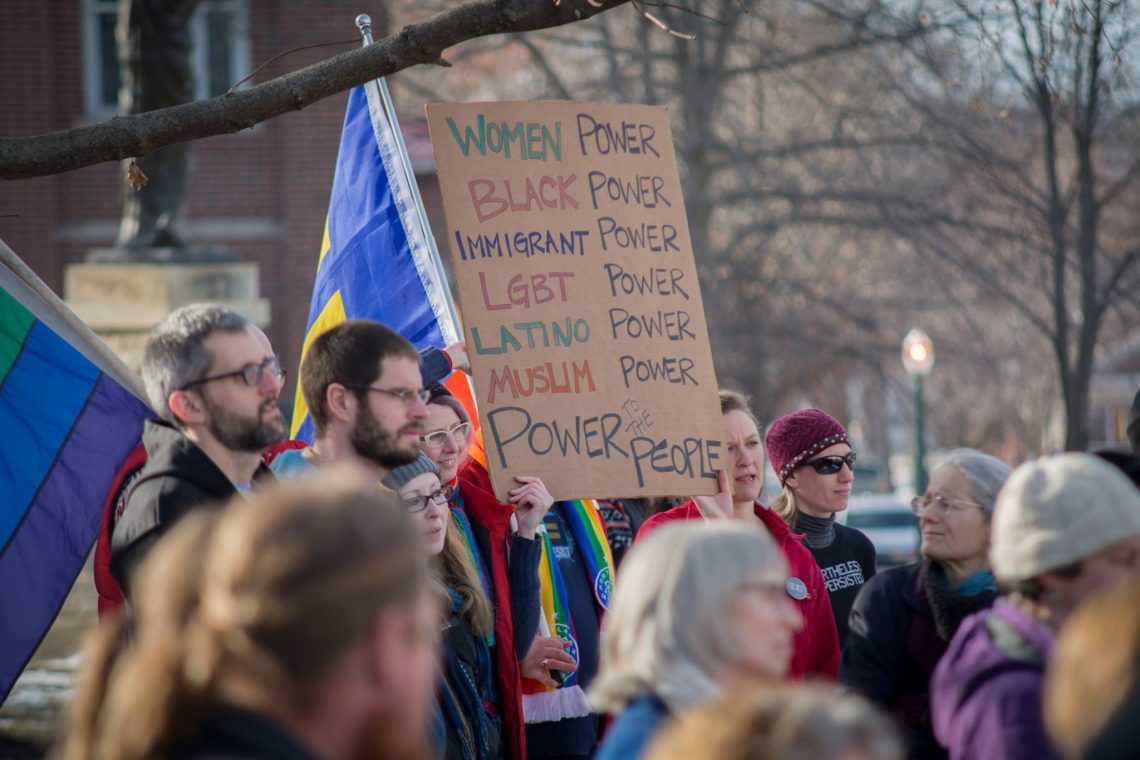 Hundreds of marchers gather in front of the courthouse in Decorah, IA

In a historic and revolutionary 2017 Women’s March, more than 2.6 million people across the nation protested the inauguration of Donald Trump as the United States’ 45th President.

One year later in rural Decorah, Iowa, hundreds of people joined hundreds of thousands more across the nation to celebrate, honor, and continue that revolution with a “Power to the Polls” rally.

As stated in this year’s mission: “Women’s March is founded on a set of principles that recognize the intersecting identities of women and the necessity of centering the leadership of the most marginalized among us….”

The Women’s March movement is not simply about the wellbeing of women; it’s about the well-being of ALL people, especially those most marginalized and least represented by our current political system.

The Women’s March movement represents a commitment to the belief made famous by Martin Luther King Jr, in his Letter from a Birmingham Jail: “Injustice anywhere is a threat to justice everywhere.”

The face of America is drastically changing as the nation’s demographics are rapidly shifting, with an increase in both diversity and youthfulness. While the United States is expected to grow somewhat older—with the current population of people 65 years and older growing from 13 percent to 20 percent by 2050—the population of younger Americans is also expected to rise. Census data suggest that the 15-to-64 age group is expected to grow 42 percent between 2000 and 2050.

With regard to racial and ethnic diversity, the U.S. minority population, currently 30 percent, is expected to exceed 50 percent before 2050.

Especially important for those of us living in Iowa and the rural Midwest, one of the least anticipated developments in this changing demographic will be the resurgence of the region often dismissed by coastal dwellers as “flyover country.”

For the better part of the 20th century, rural and small-town communities have declined in percentage of population and in economic importance. In 1940, 43 percent of Americans lived in rural areas; today it is less than 15 percent. Population and cost pressures, however, may actually revive America’s interior.

The Internet has broken the traditional isolation of rural communities, and as mass communication improves, the migration of technology companies, business services, and manufacturing firms to middle America is likely to accelerate.

Concerns about energy sources and hydrocarbon emissions will also bolster America’s interior. The Midwest will be pivotal to the century’s most important environmental challenge: the shift to renewable fuels. Recent estimates suggest the United States has the capacity to produce annually more than 1.3 billion dry tons of biomass—enough to displace 30 percent of the current national demand for petroleum fuels. The Midwest will play an important role in this process.

The Midwest will also continue to play a significant role in America’s ongoing shift to wind and solar power. The nation’s first “integrated” wind and solar hybrid project will soon begin producing power outside a small city in northwest Minnesota (Red Lake Falls).

In addition to energy cost benefits, wind and solar power have already provided significant air-quality benefits in the upper Midwest and mid-Atlantic regions.

One of the most pressing social problem facing mid-21st-century America will be fulfilling the historic promise of upward mobility. In recent decades, wages for certain high-end occupations have grown rapidly, while wages for lower and middle-income workers have stagnated. It is actually more difficult for poor and working-class people to move up the socio-economic ladder today than it was in the 1970s. The income of college-educated young people, adjusted for inflation, has been in decline since 2000.

All of these reasons and many more are why it is so important to launch a massive national voter registration movement, with the goal of registering more people (especially women and politically underrepresented people) to vote, and to elect to public office more women and politically underrepresented progressive candidates who will champion the causes and concerns of a more diverse America.

Let Americans everywhere commit to getting out the vote in 2018!

“We are the leaders we have been waiting for!!”

POWER TO THE POLLS!!!