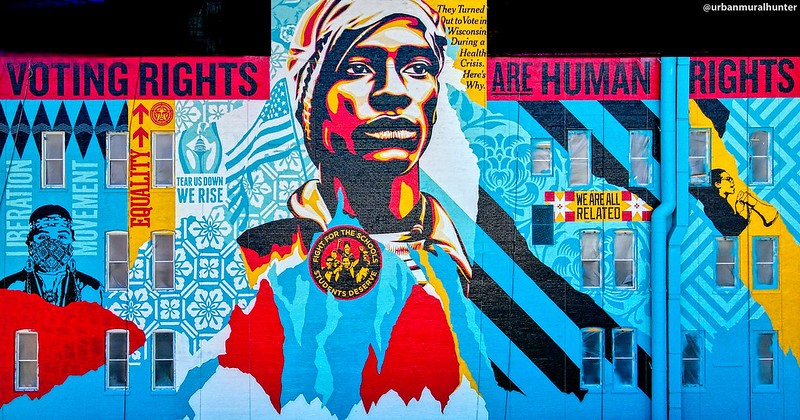 The 15th Amendment ensures the right to vote regardless of race.

The 19th Amendment ensures the right to vote regardless of sex.

The 26th Amendment ensures the right to vote for every citizen 18 years of age or older.

While it has never fully been the case in practice, voting has frequently been presented in theory as a universal human right.

Universal suffrage gives the right to vote to all adult citizens, regardless of wealth, income, gender, social status, race, ethnicity, political stance, or any other restriction — subject only to relatively minor exceptions.

Unlike the right to vote, there is no universal human right (in practice or theory) to own a gun. While the U.S. Constitution is unique among constitutions in ensuring a right to bear arms, it does not present this right as an unlimited right.

While the 2008 U.S. Supreme Court case, District of Columbia v. Heller, held that the Second Amendment guarantees an individual right to possess firearms independent of service in a state militia and to use firearms for traditionally lawful purposes, including self-defense within the home, it did not grant an unlimited right.

Like most rights, the right secured by the Second Amendment is not unlimited… the right was not a right to keep and carry any weapon whatsoever in any manner whatsoever, and for whatever purpose.

Pro-gun advocates present the 2nd Amendment as though it guarantees a right to have access to and to carry any gun a citizen desires. They argue that virtually any restriction placed on “law-abiding” citizens is a violation of the 2nd Amendment.

The right to vote is a far more fundamental right for preserving democracy, freedom, and equality than an individual right to carry a weapon — especially when such weapons are frequently used by individuals as a preferred means of conflict resolution.

The right to vote and to participate in the democratic process should be a universal human right of every citizen in a democracy with little (if any) restriction.

Republicans do not value all constitutional amendments equally.

A disgruntled Donald Trump, who failed to win the popular vote in 2016, lost his bid for reelection in 2020. The following year at least 19 states (led by Republican legislatures) passed 34 laws restrict­ing access to voting. More than 440 bills with provi­sions that restrict voting access were intro­duced in 49 states during the 2021 legis­lat­ive sessions.

As of May 26, 2022, lawmakers in 39 states have considered at least 393 restrict­ive bills for the 2022 legis­lat­ive session. In addition to these restrictive bills, between Janu­ary 1 and May 4, 2022, six state legis­latures — Alabama, Arizona, Flor­ida, Geor­gia, Kentucky, and Oklahoma — have passed nine elec­tion inter­fer­ence laws.

Elec­tion inter­fer­ence laws open the door to partisan inter­fer­ence in elec­tions and threaten the people and processes that make elec­tions work. Politicians supporting such laws make base­less claims of wide­spread voter fraud as their rationale for restrictive and interference laws.

Unsurprisingly, a vast majority of the restrictive and interference laws disproportionately affect communities comprised primarily of black and brown voters.

When Donald Trump called Geor­gia Secret­ary of State Brad Raffen­sper­ger to demand that he “find votes” after Trump lost Georgia to Biden, Trump was joined in his efforts to undermine the election by Cleta Mitchell, a prom­in­ent right-lean­ing attor­ney repres­ent­ing the National Rifle Asso­ci­ation.

As it turns out, many of the states with the least restrictive gun laws have proposed some of the most restrictive voting laws. For example, Georgia, which has few gun restriction laws, passed a law making it a crime to distrib­ute water or snacks to voters wait­ing in line.

In contrast to their resistance to propose gun restriction laws after hundreds of mass shootings, since Trump’s presidential election defeat, Republican legislatures have introduced hundreds of restrictive voting laws, including but not limited to restrictions on mail voting, stringent voter ID require­ments, reduced voting days and hours and polling locations, and limit­a­tions on what elec­tion offi­cials can do to help promote voter access.

Rather than becoming a “stop the mass shooting and gun violence” party, Republicans have become a “stop the steal” party.

While they resist even modest restrictions limiting access to guns — claiming such restrictions are a violation of the 2nd Amendment — they have no problem placing severe and egregious restrictions on Americans’ access to voting.

Their total disregard for the rights protected by the 15th, 19th, and 26th Amendments reveals that it’s clearly more than a proclaimed regard for the 2nd Amendment and constitutional rights that are fueling Republican resistance to passing restrictive gun legislation.

Politicians who oppose common-sense gun restriction legislation are not doing so because they have high regard for Constitutional rights and freedoms. Their evisceration of voting rights and their total disregard for the 15th, 19th, and 26th Amendments reveal as much.

Many (if not most) have deliberately sacrificed public health and safety for personal greed. They are using the Constitution as an excuse to benefit themselves.

If current members of Congress are unwilling to pass gun control legislation, it is up to American voters to elect Congressional members willing to do so.

It is also the responsibility of American voters to elect members of Congress who are willing to defend human rights like the voting rights represented by the 15, 19, and 26th Amendments.

It is time to reject and vote out of office politicians who simply use the Constitution to benefit themselves and their powerful lobbyist supporters.