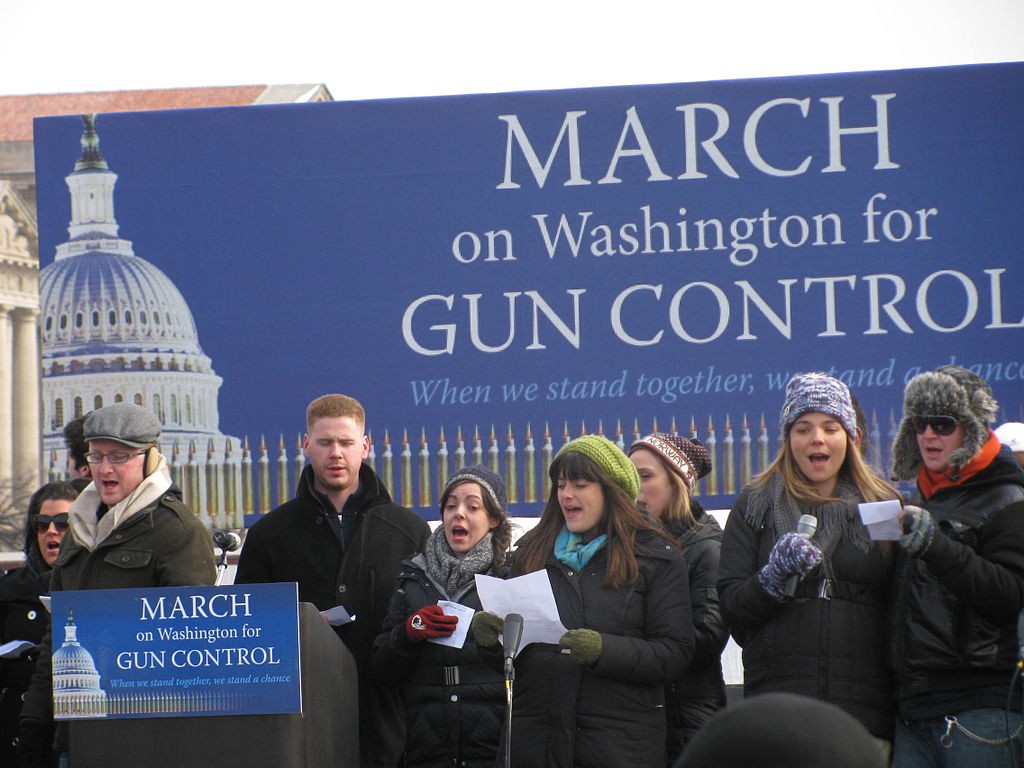 Photo by Slowking4 | via Wikimedia Commons

While I provide a specific action plan at the end of this article, allow me to simply say that American democracy cannot allow for 80% of Americans to be ignored. It’s that simple.

I understand why it’s difficult for many (if not most) Americans to believe gun control legislation will ever be implemented.

There have been 27 school shootings so far in 2022 and more than 200 mass shootings this year.

Seven of the deadliest mass shootings in modern U.S. history have happened in the last 10 years, and there has been no significant gun control legislation passed. Virtually every mass shooting has been followed by political inaction, despite the demand for action from most Americans

In the ten years since Sandy Hook, gun laws in the U.S. haven’t changed much, and unfortunately, most Americans have bought into a narrative that there is nothing they can do because politicians won’t do anything.

The problem is not the politicians

While it’s easy to blame politicians, it’s important to remember that politicians are elected by American voters.

Every U.S. senator opposed to passing gun control legislation was elected by American voters, often by a small percentage of eligible voters. Despite the record turnout of voters in 2020, still, nearly 40% of eligible voters did not vote.

Politicians cater to the priorities of voters. If voters are not going to vote them in or out because of an issue, then they’re not going to care about that issue.

Texas senator Ted Cruz committed to speaking at the annual National Rifle Association (NRA) convention held in Houston, Texas on Friday, May 27, just days after the Uvalde, Texas school shooting. The Robb Elementary School shooting is the deadliest school shooting in Texas history and the second deadliest in the nation. Senator Cruz, however, feels no pressure to oppose the NRA and to support gun control legislation — probably because he has received more money from gun rights supporters than any other member of Congress.

Immediately after the murders in Uvalde, Texas, Cruz responded by saying that gun control will not help and that “we need to devote far more law enforcement resources to stopping violent criminals” — suggesting that more guns are the solution to gun violence in America. Cruz even defends the NRA, claiming the NRA stands up for people’s rights.

Ted Cruz is not worried about being voted out of Congress, even though a February poll showed that only 34% of Texans felt gun laws should be left as they are now and 16 percent wanted less strict laws. That means half of Texans voters are not necessarily in favor of current gun laws in Texas.

That number could possibly increase in response to the Uvalde, Texas school shootings. Eligible voters, however, have to let Texas politicians know that gun legislation crafted to protect Texans is a priority.

The power of prioritizing gun control legislation was revealed in the 2018 midterm elections.

In 2018, Democrats ran strongly on the issue of guns, universal background checks, and banning assault weapons. They turned out voters that normally stayed home during the midterms, and as a result, Democrats won the House.

When voters came to the polls in 2018 and elected a Democratic majority in the House, it was with the explicit purpose of getting gun legislation passed. That’s exactly what the House did.

In an impassioned speech just after the Robb Elementary School shooting, that left 19 children and two adults dead, Golden State Warriors head coach Steve Kerr criticized the U.S. Senate for failing to represent the desire of the American people:

While I agree with Kerr’s sentiments, those 50 senators are not holding Americans hostage. They are representing what they believe to be the priorities of the people who voted (and/or will vote) for them.

American voters get what they vote (or don’t vote for).

If you are part of the 80–90 percent of Americans that support gun control legislation, then you need to contact your senators immediately and let them know this is a priority for you and that you are only willing to vote for candidates for whom it is a priority.

It is time to stop complaining and time to take action. It is time for our U.S. senators to experience unrelenting pressure from their constituents.

Go to the U.S. Senate website “contact” page, and type your state in the top drop-down box. You will immediately be taken to a page showing you your senators and their D.C. mailing address and phone number. While you can call their D.C. phone number, it may be more effective to use their local contact information.

Once on the page with your senators’ D.C. information, you can click their name to get their local mailing address, phone number, and oftentimes email address. If you email, there is often an option to receive an email reply response.

This is why gun control legislation is inevitable

If the 80–90 percent of Americans who support gun control legislation do this, there is no way the democratic process will allow their desire to be denied.

If you are willing to take action and contact your senator, please leave a response saying so, leave several claps to encourage other readers to take action as well, share this article with everyone you know who favors gun control legislation, and ask them to respond, clap, and share also.

Let’s get this done! It’s definitely within our power!