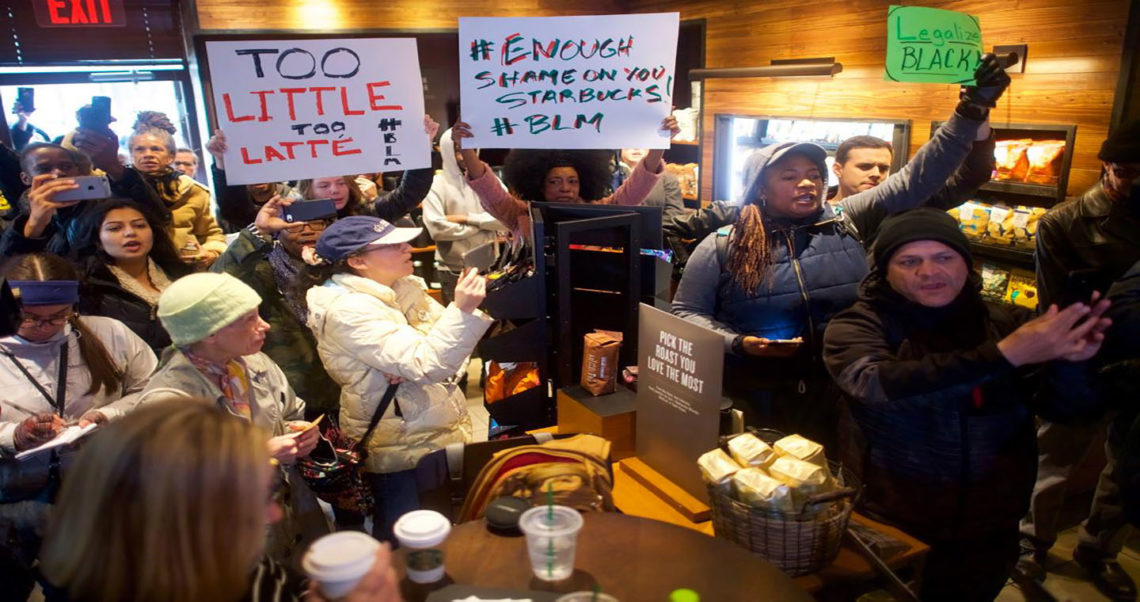 A recent incident at a Philadelphia Starbucks is being defended because the behavior–while clearly racist–was allegedly “legal.”

The Starbucks encounter is just another example of the daily difficulties of being black in America. Two black men sitting in a Philadelphia Starbucks were arrested, placed in handcuffs and forcibly removed from the premises after being asked by a Starbucks employee to leave because they hadn’t ordered.

In a video that went viral on social media, the two men are surrounded by several Philadelphia police officers. A Starbucks employee called the police because the two men had asked to use the restroom without ordering anything and refused to leave the store when asked to leave. When the police arrived, the two men, who were in no way being disruptive, were again asked to leave. They were then arrested, handcuffed, and forcibly removed. While in police custody, the men were photographed, fingerprinted and held for eight hours, according to their attorney.

As one person commented,

This is a Starbucks. Since when are people asked to leave a Starbucks who are just sitting there?

Before inundating me with knee-jerk responses that the police were simply “doing their job,” can people please acknowledge the blatant racist behavior demonstrated here?

Also, can we resist the common refrain, “there are multitudes of injustices in America so can we stop complaining about racism and asserting, ‘black lives matter?'”

As an African American man who has experienced my unfair share of racist behavior in America, I’m tired of hearing there are so many other forms of injustice in America besides racism. I’m tired of the meaningless and insulting response, “all lives matter.”

Justice is not a zero-sum game. People do not have to get defensive and point to other examples of injustice in America because people are protesting the recent racially motivated incident in a Philadelphia Starbucks.

Can’t we simply agree that this sort of racist behavior is totally unacceptable and intolerable? Despite the Philadelphia police commissioner’s response, “These officers had legal standing to make this arrest… These officers did absolutely nothing wrong. They followed policy…,” can’t we all agree that every human being should be able to sit in a restaurant while waiting for a meal companion to arrive without the humiliation of being asked to leave or the fear of being handcuffed by police for “trespassing?”

It is well past time that we call racism “wrong,” even if it is legal.